Those in the south of the UK will have struggled not to notice the heat this week as the mercury has soared to well over 30°c degrees since the weekend. While travelling in these hot conditions it reminded me of a very sucessful day out photographing railways in London some 12 years ago. 22nd June 2005 was another very hot day with temperatures peaking in the low 30's (Gravesend in Kent recorded it's highest temperature of the year the following day at 32.1°c. On the railways a lot is still very recognisable from 12 years ago but there have also been a lot of changes. My day started by heading to Barnes in South West London for the very final slam-door scrap move from SWT. GBRf's 66710 was hauling 4-VEP 3520 from Wimbledon running as 6Z41 the 11:05 to MOD Shoeburyness. The final service train for the SWT slam door fleet having run during May.

Next stop was Ealing Broadway where a variety of traction was on offer on freight services, plus of course the regular passage of Paxman Valenta powered HST's. Brand new were the Heathrow Connec class 360's which entered service just ten days earlier on 12th June between Paddington and Heathrow Airport supplementing the class 332's on 'express' services.


Freight was plentiful with the majority being in the hands of class 59's of various liveries. Aside from the flow of 59's class 60's were common with 60015, 60026 and 60061 being sighted within a few hours between Ealing Broadway and Acton Main Line. Other freight was handled by class 66's from Freighliner and EWS with a solitary wagon being hauled by a rather over-powered 67016. There were a couple of special workings which we had particularly come to see; 67029 in it's new silver livery and another slam door move with Freighliner's 47841 hauling South Central 4-CIG's 1867/8/9 as 5Z45 Stewarts Lane - Caerwent in South Wales.

Moving on from the Great Western it was time to end the evening the way that most of my trips ended around this time- with a few rides on what still remained of the 'slammers' on Southern and South Eastern. Workings were beginning to become more scarce but it was still not difficult to achieve an all slam door move first from Victoria to East Croydon and back before taking the 17:49 Victoria to Broadstairs (which was booked for the last 12-CEP at the time) to Bromley South for another slammer back into Victoria. A final 'blast from the past' on the way home is a Virgin Voyager at Clapham Junciton on one of the now withdrawn workings to Brighton. Thus ended a hot and sticky day sweltering in the sun- I'd do it again for those trains though!

You win some you loose some...

If everything in this hobby worked exactly as one planned then I guess it would be boring. One of the things that keeps me entertained is that occasional sense of surprise- when something happens that you are not expecting. Of course it works the other way as well- sometimes the event you have planned for, or the picture you have meticulously planned doesn't quite go to plan- the light changes at the last moment, or worse, the train simply doesn't appear as you expected it or at all. 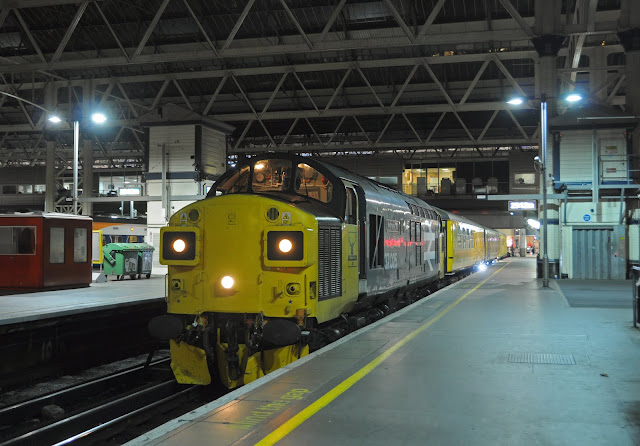 First, my 'win'- I was heading back from the pub in Surbiton where I had been with a couple of friends, seconds after descending to the country bound platform for my train home I noticed a streak of yellow passing through the London bound platform- a NR DBSO, a test train and on the back 37025 'Inverness TMD'. I had just time to check where it was heading on Real Time Trains before diving onto the next 'fast' service for London and beating it to Waterloo. Fortunately I had my camera equipment with me as I had been out photographing earlier in the day. Great to see this fantastic loco at Waterloo, especially in one of the low numbered suburban platforms. What good timing on leaving the pub! 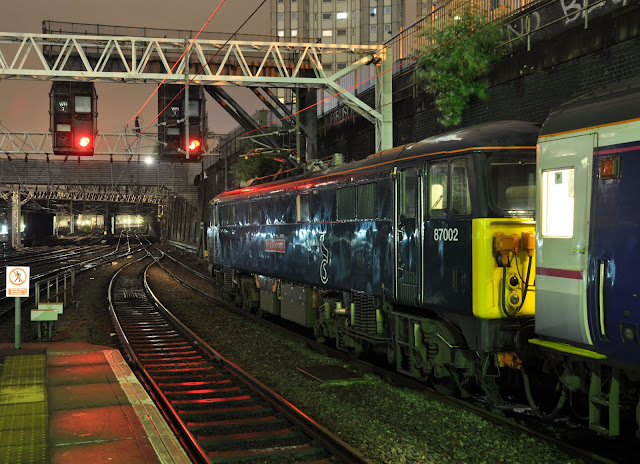 Secondly my recent 'loose'. GBRf had published in good faith that for operational reasons the 23:50 Lowland Sleeper from Euston to Glasgow/Edinburgh would be powered by 87002 on 5th June. As 87002 is 'required' and with nothing planned the following day and seats available on the sleeper at late notice I decided to give it a go. Fingers crossed as I walked up platform 2 to view the engine- and there it was on the front of the train- 87002 'Royal Sovereign'. I took my photos and made my way to my berth at the front of the train. Checked in and then returned to the front of the train to await the departure- but what was this? 87002 was no longer there! 10 minutes before booked departure the loco had been removed from the train for reasons unknown and disappeared. It would never return. Some while later 90042 arrived to work the train the reason cited was a leaky cab in the class 87. A very unfortunate turn of events, but to be fair to GBRf there clearly was every intention of using the class 87 and these things do happen. Given the awful weather that night a leaky cab could have caused plenty of discomfort to the driver between London and Glasgow.

Those who know me will know that I don't tend to travel on many railtours- Given the choice I would much prefer to chase down the traction of my choice on service trains for a more 'genuine' ride. However I do make exceptions and when the Scottish Railway Preservation Society announced a tour to Wick and Thurso with a pair of classic class 37's it was an easy decision to book a few days off work and head north of the border.

I had travelled the Far North line once previously, on a trip to Inverness with a class 158 which is the staple traction for the line, operated by Scotrail. The line is highly scenic (though the poor weather on this occasion did little to show off the landscape to me). The line is incredibly rural by nature and sees just 4 trains in each direction on weekdays. Thurso, the most northerly station in the UK and one of the termini of the route is 154 miles north of Inverness and a staggering miles north of Edinburgh (with a journey time of some 8 hours!). It was clearly going to be an epic trip and in light of the distance our train was due to depart from Edinburgh around 22:00 on the Friday night travelling overnight by way of Perth and the Highland Mainline to reach Inverness around dawn. We would then continue to Georgemas Junction to reverse before visiting both Thurso and Wick before beginning the long and scenic journey back to the Scottish capital. Overall this would involve more than 24 hours with our chartered train.

Friday 2nd June came and after a day in and around Edinburgh it was time to wait for our train at Waverley. As expected traction was a pair of 37's in the guise of preserved 37025 'Inverness TMD' and Colas Rail's 37421 (working it's first passenger train since withdrawal by EWS in 2004). For the run north I would be located towards the rear of the train formed of the SRPS Mk1 coaches. This was perfect- hopefully the chance to get some sleep and of course this would mean that the loco's would be at our end of the train for the daylight run south.

Sleep was of course hard to come by- and I'm not sure my poor earplugs, face mask left from the sleeper the previous night or the toasty ambiance of the coach (heated by the ETH on 37421) did a lot to help. Nor did the passengers opposite who gave a running commentary on how they could not get to sleep! Never mind- I was never going to get a good night's sleep in a standard seat on a Mk1 coach heading through Scotland overnight!

At Inverness the first signs of 'proper' daylight (it never got totally dark all night really) were appearing on the horizon and while our locos were taken off the train and fueled the decision was also taken to swap them around putting 37421 at the head of the train. This loco was providing our heat- but with 37025 having a fully functioning and certified steam heat boiler the opportunity was too good to turn down. 37025's boiler was fired up and soon steam heating was warming the train (this being only the second occasion in preservation that a diesel train has been steam heated on the mainline). Unfortunately some leaky steam heat pipes in the stock did not help the passengers at the back of the train where it became distinctly chilly for the run up to Thurso! Breakfast was served before Georgemas Junction where the train was shunted to allow for the first southbound unit to pass our train. One locomotive was also run around so that our train could be 'top and tailed' for the branches to Wick and Thurso. After the stock had been watered we continued with 37421 powering alone to Thurso.

Here we left the train and took advantage of the optional coach tour to the very north of Scotland (well, as we had come this far!) heading to Dunnett head (the most northerly point in the UK) and to the more famous John O'Groats.

Re-joining the train at Wick the locomotives had been run around again to leave 37025 on the business end with 37421 once again tucked inside for heating purposes (37025 is through wired for ETH, however there was some concern the cables may not have been long enough to master the severe curves on this route!). The sun had come out and with the locos on our end of the train heading south into the Scottish Highlands this really was something to savour. The tour lost some time at Georgemas Junction waiting for a Scotrail Unit. The late running resulting in an extended stop further south at Brora, now very much in gloomy Scottish weather, to pass another unit while the booked stop at Dingwall unfortunately had to be curtailed (much to the disappointment of those wishing to stop here for Fish & Chips!).

After Inverness the train joins the Highland Mainline, no less scenic than the Far North routes but with a much increased linespeed and full semaphore signalling in many places. After climbing up from Inverness our train is recessed in order to let a Virgin Trains HST pass on the daily 'Highland Cheiftan' from London Kings Cross- this passes at speed proving this really is a main line despite the altitude and passing loops! Climbing on to Slochd and then Drumochter summits is a real test for our locomotives- excellent sound effects are heard from the head of the train with the locos left at full boar for some 20 minutes climbing the gradients.
A photo/pathing stop takes place at Blair Atholl as my journey begins to feel near to its end. Our train is now running to time having missed the long lay over at Dingwall and arrival at Perth, where I would leave the train, is on time at around 22:30. Those staying on to Edinburgh will enjoy another 2 hours of the class 37's but after 24 hours with this train I am definitely ready for bed.

What an excellent tour this has been- Great scenery, locomotives, company and even weather (in the most part). I'm sure I will be back again before too long for another SRPS tour- Kyle of Lochalsh must be high on my list now to reach with some classic Scottish 37's?