DSB operates all mainline rail services from Copenhagen. While most train are multiple units, both diesel and electric, there is some respite from the rubber-fronted trains in the form of 36 [37 built- one destroyed by fire] Henschel-built diesel locomotives dating from 1981. These operate in push-pull formation with double-decker coaches out to many cities on Zealand- Denmark's most populated island.

In addition to the diesels there are also a small number of similarly styled electric locos- the EA class. These locos recently have only been employed working the City Night Line sleeper train to Copenhagen- but with the sad withdrawal of this service are now also being pressed into action on the double-deck stock working to some locations which are fully electrified.

The ME's regular departures from Copenhagen, often several per hour, make the route one of the best remaining places in the world to sample a busy diesel hauled operation on a main line. Days may be numbered for the loco's however as there is a plan to replace them with cascaded IC3 train sets once the IC4's have replaced those on their current InterCity duties. Of course this does all depend on the IC4's actually working- that however, is a story for another day.

The new order on Chiltern


The Chiltern main line has become the best place to experience loco-hauled passenger diesel operations in recent years with the introduction of class 67's on many trains from London Marylebone to Banbury, Birmingham and beyond. Now it is time for a change as the class 67's hired from DB Schenker give way to Class 68's supplied by DRS.

While the changeover was due to commence at the December timetable change delays with the new locos saw an extended stay for the 67's. Now however the 68's are starting to appear on services- first the Banbury commuter turn went over to 68 operation and now several through trains to Birmingham are charged with class 68's.

Chiltern Railways have six class 68's dedicated to their service and delivered in their 'mainline' silver livery. These locos have been modified to allow push/pull working with Mk3 coaches and Driving Van Trailers. Two additional DRS locomotives have also been fitted with the modifications.

First impressions of the locos are good- they are smart, a nice shape (though I'm still not convinced by that dent in the cab front) and, almost surprisingly for a modern diesel- they sound good too! Hopefully they will settle down to provide excellent service for Chiltern Railways and for DRS and will be around for us to enjoy hauling Mk3 coaches to Birmingham for many years to come! Who would have thought just a few years ago that brand new diesels would be hauling trains from Marylebone! 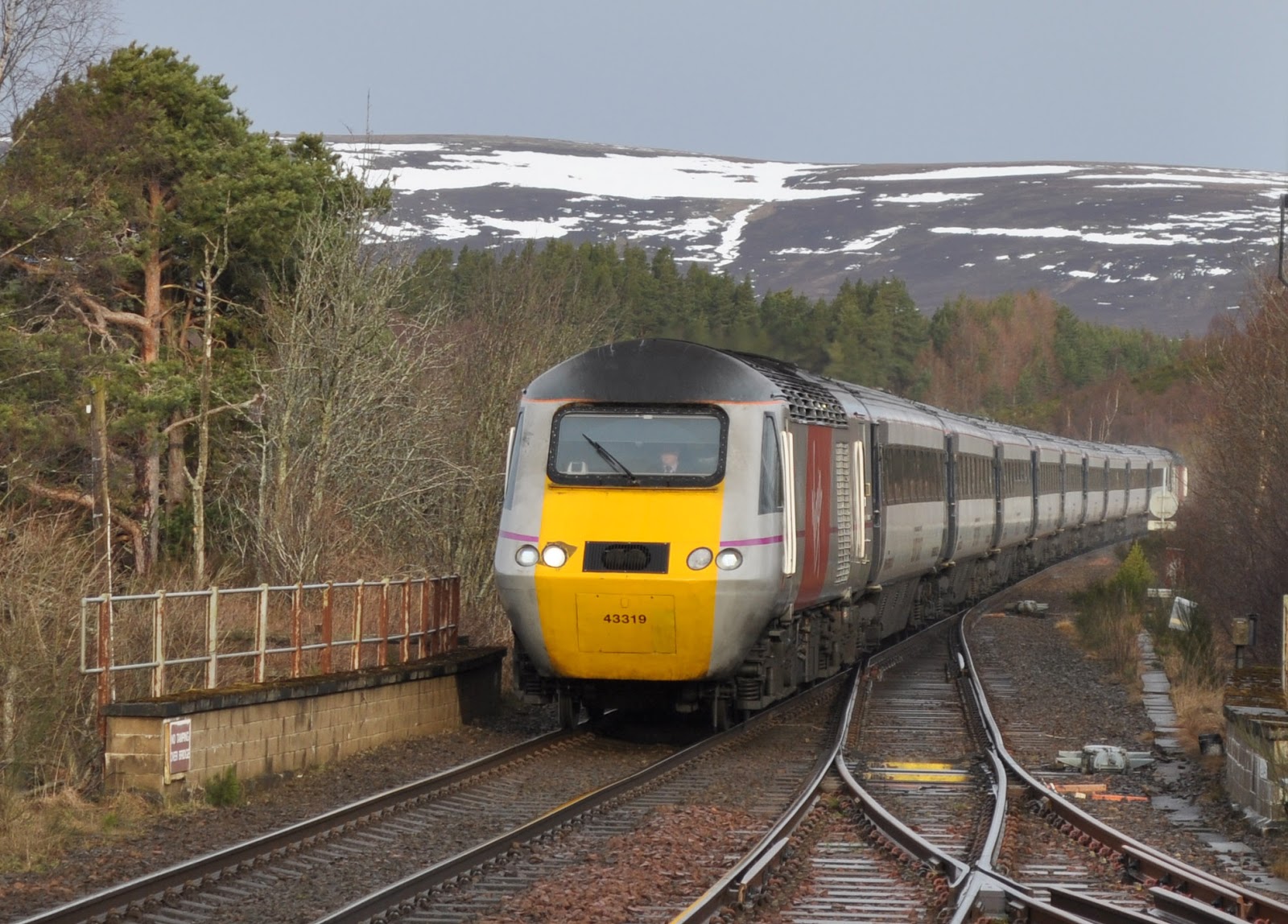 On 1st March Virgin Trains East Coast commenced operation of the Inter City East Coast franchise superseding the government owned company Directly Operated Railways. The company (90% Stagecoach and 10% Virgin) has acted quickly to re-brand it's trains with large Virgin stickers. Already some of the Intercity 225 trains have been revealed in a totally new livery. The EC HST fleet will not be the first to wear Virgin colours although the scheme does differ from the previous livery seen on West Coast and Cross Country HST's which operated in Virgin days. The interim livery is seen here on 43319 as it passes non-stop through Carrbridge on the Highland Main Line with the 'Highland Chieftan' to London Kings Cross- one of the longest continuous rail journeys in the UK.
Posted by James at 19:32 No comments:

For fans of heritages AC traction there has been cause to celebrate recently. The AC Logo Group (ACLG), owners of many heritage electrics including 86101 and 87002 have secured a main line contract for several of their locomotives. Until GBRf can secure enough class 92's for the Serco Caledonian Sleeper contract they are to hire in locos from the ACLG to work the empty stock moves for the sleeper trains in London. This will be a great source of income for the preservation group and means investment in it's locomotives- plus a re-paint into 'Caledonian Blue'.

It is the re-paint which seems to be causing some controversy with some enthusiasts up in arms that these locomotives are being painted out of their traditional BR blue livery- after all- the are preserved. People need to keep an open mind about these developments and view them as just another stage in the locomotive's life. In the fullness of time it is very likely that these locos will return to their much loved BR blue- but for now they will wear the colours of their new operator. An operator who is paying for their use, thus securing their future as well as further progressing the restoration of other members of the ACLG fleet such as the unique class 89.

The enthusiast community should be commending the ACLG for securing this work, which represents a fantastic opportunity for these locomotives. I for one am certainly looking forward to seeing them on the blocks at Euston with the sleeper- whichever shade of blue they happen to carry!