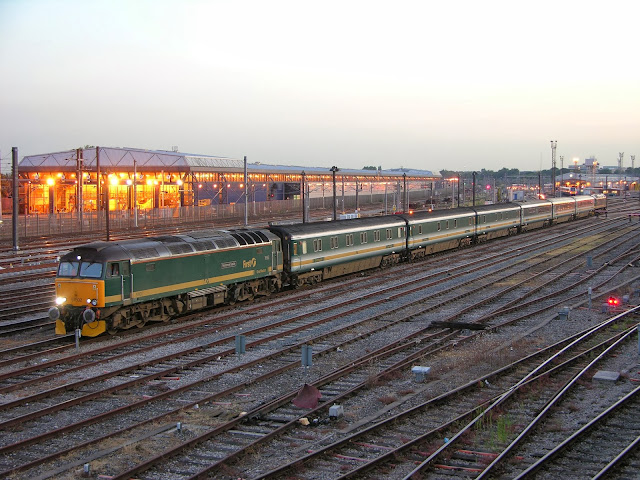 Every now and then when trawling through my photo collection (usually looking for something which I remember taking but can not for the life of me remember where or when) I stumble across one of those pictures which you remember being super pleased with at the time. This is one of those pictures. Taken from the towpath of the Grand Union Canal in Harlesdon looking down towards Old Oak Common and North Pole depots. It was my favorite time of day for photos- twilight. Almost as if I had planned it FGW's 57602 then pulled up to the depot reception roads with the empty coaching stock for the Night Riviera Sleeper. There was just time to set up my tripod and camera to get a few snaps before the train disappeared to Paddington to pick it's passengers for the overnight trip to Penzance.
Since this photograph was taken- 24th July 2006- I have often considered re-visiting the location to repeat it- if indeed it is even still possible. Maybe I shouldn't bother. This is still one of those photos that 'just worked'.
Posted by James at 21:24 No comments:

A good hour to find myself some lunch and stroll around the city- It was my third visit and I finally got a chance to marvel at the cathedral!
Well worth the effort if you are stuck here between moves.


I had spent quite a while working out what to do with my day in Paris (with an Interrail) and decided to head out a little further than the usual Transillien workings. All of the BB67400 diagrams which I saw were running as booked which is always a good start and I do enjoy the variety in liveries of the Picardy 67400s. The RRR stock in use in Picrdie is now really starting to look pretty dire on the inside- particularly the 'cycle/thrash/smoking' compartment at the business end. I am sure that the Picardie diagrams are made unnecessarily complicated by the fact that one loco does not stay with one set of stock all day. The RRR set which arrived with BB67484 from Creil on C1 was then paired up with BB67456 on C9 to head to Laon. It's not like there aren't spare sets sitting outside the station all day!

I was surprised to find that the Crepy-en-Valois route out of Paris Nord still seemed to be solid BB17000 with RIO sets- I did not see any Transilien units on this route at all!

It was actually great to get a break from the trains and feel a little like I was having a 'real' holiday having got very little sleep on the Trenhotel. I did not find the Talgo sleeper particularly comfortable and the suspension is certainly odd. That said both Talgos were well loaded- I really hope they don't face the axe once through TGV's begin. The Trenhotel would seem to serve a very different market.
For anyone wondering, the gauge change process is really not very exciting at all.

I also cannot clear up the Interrail situation with regard to Talgo 460. I was traveling on an advanced ticket as far as Portbou where the plan was to transfer to my France Interrail. This is valid from the border and a supplement should be payable for the Talgo. However nobody could sell it to me from either the UK or in France it seemed. Thought I would try my luck just waiving my Interrail... but nobody bothered to do a ticket check after Barcelona so I'll never know!
I also managed to confuse myself on the Barcelona Metro and not really leave enough time to get to Sants. Thanks again to the taxi driver in Barcelona who now has a £10 note thanks to it all going wrong. I literally made the Talgo by about 3 minutes!

Of all the trip this was the day I was most worried about diagrams sticking. My wariness proved wise as the second BB67400 turn produced a unit and the only BB25500 turn produced a TER Provence Alps Cote d'Azure BB22000- Are there many of these around? Still- at least it was hauled, and the all day diesel turn produced. BB67400 was however plastered in graffiti right across its front runining any photo opportunity.
The Marseille end of the 'long way' to Miramas is absolutely stunning and highly recommended.
The condition of the TER Provence Alps Cote d'Azure stock is not great.

There is clearly a graffiti problem in these parts and the 'cycle/thrash/smoking' compartment definitely seemed to be in the domain of the smokers! Some trains have signs of graffiti and vandalism inside also.
I did not have my Interrail checked once all day...
Unfortunately upon entry to the overnight sleeper I discovered that much of my compartment had already gone to bed at 22:00 with the lights very much out... no chance of reading then.

to Selestat- but it was running over an hour and a half late! Plan B then...)

The final day started off with a slight disappointment. Our 'Big Diesel' from Chalindrey to Belfort was one of only two which I do not require- 72145. We then arrived about 10 minutes late into Strasbourg. No ticket check on the overnight between Marseilles and Strasbourg- I found this a bit surprising!


If you like Sybics and blue 67400's Strasbourg is definitely the place to go (it seems to be a lovely city as well). All diagrams viewed turned up hauled as booked.
The BB25500 diagrams I had for Strasbourg were rather old, so I was not at all sure whether they would stick or even still be around, but again all appeared to work as on paper. There are quite a mixed bag of liveries on the BB25500's with locos in the original 'concrete' livery, 'En Voyage' and several wearing 'Ile de France' colours.
The weather all day was not great- there were huge patches of blue in the sky... but the sun always seemed to stay behind a bank of cloud wherever I was. It is worth noting that pretty much ALL of the locos at Strasbourg are at the north end of the trains- this includes the push/pull Sybics and the 67400 and 25500's- this makes photography difficult for the light!


Also around Strasbourg station was DB 181 233 which spent most of the day stabled to the south of the station. Around 16:00 it was photographed at the head of the Russian sleeper train, but when I returned 20 minutes later it was back stabled again! Not sure what that was all about!
The tram between Strasbourg Station and Krimmeri M takes about 15 minutes- my move only just made it! The move was a bit desperate- but did get me my 10th BB67400 in the 4 days.
TER Alsace stock was probably in the best condition of any I had seen over the last 4 days. RRR 'Cycle/thrash/smoking' compartments here were actually being used for bikes! The first time I have seen this! The trains were all clean and smart internally and TER Alsace have done a fantastic job with their refurbished Corails! Ticket checks were a little more frequent than further south- I think my interrail was viewed twice- somebody even stamped it!
I saw a few extra trains at the end of the day at the beginning of the evening peak due to my TGV being delayed. Initially by 5 minutes, but by about 15 by the time we departed. This only got worse as by this point a BB25500 on a stopper had been let out in front of us which we crawled behind most of the way to Saverne. Despite being 40 minutes late at one point we were only 25 down into Paris Est after a fast run on the LGV. This just about gave me enough time to connect with the Eurostar home- though I had got my ticket stamped with the delay just incase.

All in all a very good trip. It would have been nice if my international connections had been slightly less rushed, but all trains were caught according to the plan. This wasn't really a photographic trip, which may have been a good thing given the weather- but did achieve a good amount of loco hauled mileage and I felt I had achieved good value from my Interrail.
I am sure I will make use of sleepers again as they are a great way to travel time efficiently between locations- even if I don't sleep on them very well.
My top recommendation for anyone who has not done so and wants to get out and enjoy the French diesels is to spend a day or two covering the Picardie workings off Amiens before it is too late. I am really going to miss these when they are gone!
Anyway- that is it for 2013 in Europe.

I hope some of you have made it to the end and have found this report interesting. Thanks again is due to all who have helped in planning this trip and providing information. Particularly all those on European Rail Gen and on this occasion James Hawkes for sorting e-mailing me the BB25500 diagrams which I had forgotten to bring!- without you all planning these trips would be very difficult!

Edit (Feb 2014): Since writing this report sadly all Talgo trains beyond Spain have been withdrawn following the commencement of through TGV services on the high speed line to Barcelona. The Elipsos Trenhotels from Paris to Barcelona and Madrid no longer run, while train Talgo 460 now only runs south of Barcelona. It is still possible to travel to Barcelona overnight from Paris by taking an 'Intercities du Nuit' train to Cerbre and a local RENFE service connecting into Barcelona.