Across America with Amtrak - Part 2 - The Capitol Limited


Our stop in Pittsburgh was purely functional and I felt a little embarrassed when people asked how long we were staying and what our plans were- 'About 3 hours, we've got time for dinner.' The Pennsylvanian had dropped us off shortly before 9pm and our onward connection about the Capitol Limited (which as the names suggests originates in Washington DC) was at one minute to midnight. Not really sure where to head for dinner we accost a local who seems to know where he is going- indeed he is able to point us in the right direction to reach some restaurants and after a while of aimless wanderings we sit ourselves down behind the bar at a burger restaurant only to find our local two seats down behind the same bar- 'this is a good place'. He is right as it turns out and we enjoy a very nice meal washed down with a pint or two of American 'hard cider.' Besides football, a subject on which i probably have far less knowledge even than the average American there are several other hot topics to discuss with our friendly barmaid Ashley; the UK 'Brexit', the US election and possible presidency of Donald Trump and of course a few lighter topics also 'why is a dime a smaller coin than a five cent piece?' When it came to desert Ashley was quick to recommend the pumpkin cheesecake. Now I like cheesecake but I wasn't convinced 'no, really, it's good. If you don't like it I'll eat it ' she said with a smile. It was alright- but I don't think I'm yet converted, or particularly likely to order it again. We regrettably order our bill as one of the managers appears with  his head in a bag of mint 'mmm, fresh mint- the best part of the job'. I point out that a couple of our drinks are missing from the bill but Ashley is well aware so we don't press the point any further! We leave a tip and make our way back to the station leaving our new friends to debate whether or not the mint should live in the cooler (apparently it shouldn't... but it always has).

There are plenty of passengers in the waiting room for the Capitol Limited to Chicago and despite being present more than 30 minutes before departure we have apparently missed the chance to check in our bags- not a problem though as an Amtrak steward confirms that our suitcases will be fine as carry-on luggage. The train arrives a little earlier than expected and we file on for boarding. The first attendant at the Superliner door asks 'Sleeper or car?'. 'Sleeper' I reply. 'James & James?' - well it's nice to be expected! I guess there aren't too many pairs of males joining the train here tonight.
Our Superliner roomette is upstairs and consists of two bunks running along the inside of the coach wall lengthways, there are another two on the other side of the train with a central corridor between. The car hosts explains the features of our cabin and that there are hot drinks and juice available at the centre of the coach with one restroom on the upper level together with three more and a shower below.. Breakfast would be served from 6am. Having secured the lower bunk with more generous proportions I decided to call it a night and after grappling with the tap (which insists on releasing a high powered jet of water which ricochets off the basin bowl) and forgetting my towel I bed down for the night.

I didn't sleep as badly as I had expected as I could only remember being awake for one of our overnight stops, at Toledo, Ohio. James on the upper bunk had slept OK as well though he did complain that it was a little on the small side. We attended breakfast at around 7:30 and for the second time this trip my attempt to order French Toast was thwarted due to it's non-availability. I settled instead for omelette- with grits. I couldn't remember what grits where, though was sure I had had them once before. I still couldn't really tell you what they were except that they had the consistency of porridge and didn't look nearly as nice as James' potatoes. You live and learn.

The train passes several industrial yards on its final approach to Chicago and neither theses, the dismal weather or the eventual arrival 30 minutes late into the subterranean platforms of Chicago Union seem particularly inspiring. The sun however did make an appearance before our stay was out and gave us a taste for this great city which we had really come to rather enjoy.

Across America with Amtrak- Part 1- The Pennsylvanian

Almost missing your first train of a trans-continental trip probably isn't the best way to start. In truth it was mostly my fault- for some reason I am just not capable of allowing enough time for these things. Of course it wouldn't have been so bad if the '10 minute' taxi drive that I had predicted had actually taken 10 minutes- I swear we hadn't seen traffic in downtown Manhattan until we had a train to catch! The elevator in the hostel hadn't helped either- you don't expect an eight floor descent to take almost ten minutes do you?- but it did. Due to maintenance only one elevator was in service and of course everyone wanted it. We were full by the seventh floor but that didn't stop us from pausing at every other floor for the doors to open and the incumbents to wave at waiting guests who could not board.
'Amtrak?' questioned the taxi driver, 'that's right over the other side of the station- you'll have to run!' I guess entering New York's Pennsylvania Station just 5 minutes before your train departure does have one advantage- you don't have to spend any more time than absolutely necessary in this ugly cavern beneath Madison Square Garden (though you also don't have time to pick up a New York Cheesecake for the train). We found the train (and we really did have to run for it) on track 34 and boarded with two minutes to spare.
The Pennsylvanian left New York right on time and immediately dives under the Hudson River to emerge into New Jersey. We find some satisfactory seats and settle in for the journey. Seating is reserved on the train but only in so much as we are guaranteed a seat- which seat we chose to occupy is up to us. The train continues along Amtrak's busy North East Corridor until we approach what is undoubtedly the most important intermediate stop on the route at Philadelphia, where the train pauses for more than 30 minutes for an engine swap and reversal. The only electric loco we will experience this trip is promptly uncoupled and the train is briefly plunged into darkness. While the diesel engine which will work forward is attached there is time to head up from the dark platforms to the grand station hall, we are reminded however not to be late back to the train as it is the only departure today going east of Harrisburg. Philadelphia station is filled with a great array of eating establishments but seems to lack options to take food away to eat later. Feeling my diet in NY had been far from healthy I picked up a cup of fresh fruit and joined the re-boarders queue to get back onto the train.
It is shortly after we resume our journey that we are forewarned of our first Amtrak delay. There is a broken down train in front of us and we may need to make an extra stop to pick up its passengers. We don't know how long the delay will be, or even if it will happen at all for certain but the conductor does stress that if it does, all available seats on the train will be required. Anyway, this is uncertain as of yet- what is certain is my hunger. The plan was to buy provisions back in at Penn Station in New York but of course there was no time for that. The on board cafe car would have to suffice. The smiley bar attendant was happy to serve me a microwave pizza (all the staff are so friendly on this train!) which I sit down to eat on the tables near the counter. We could gain snippets of the situation with the broken down train through listening to the calls on staff radios. Towards the end of the meal it was announced that we would indeed be rescuing the stricken train and would be delayed as a result. We would then be further delayed as we would now be calling at all the local stations to Harrisburg. We return from the cafe to our original seats to await the influx of passengers- and the delay.

The delay and drama of the broken down train turns out to be somewhat less exciting than we perhaps might have anticipated- no pushing of the failed train and no passengers scrambling up on to the train from the tracks having been stranded in the back of beyond. The conductors estimate of over 100 people joining our train however is not far wrong and while everyone who has been waiting 2 1/2 hours does get a seat it is certainly now busier on board.
We woke to sunshine in New York but as the day has gone on and we have headed west through Pennsylvania the weather has deteriorated and by Harrisburg it is raining heavily. The scenery however has been interesting with a green undulating landscape and a river which we have followed for much of the journey.
I am often struck by how unfamiliar Amtrak passengers seem to be with the most basic principals of taking a train ride- getting on and off. There seems to be an attitude that the train will wait for them no matter how long they fancy taking to finish their coffee, pick up their bags and make their way to the door. After about four 'Final call's' for Harrisburg we eventually get back on the move, now minus the extra guests who's train was due to terminate here. I would love to see how these people would get on in a country like Japan; 'We will shortly be making a brief stop at Shin Osaka.'- miss that announcement and the 30 second stop and you'll be missing your destination!
It is now just our train, running one hour late and a steady procession of black and white Norfolk Southern freight trains heading west towards Pittsburgh. After rounding the famous horse-shoe curve near Altoona (with commentary from the train conductor) there isn't a lot of daylight left with which to admire the scenery so attention turns to our books and magazines to keep us entertained until our arrival in Pittsburgh some 45 minutes
behind schedule.

Amtrak in the USA 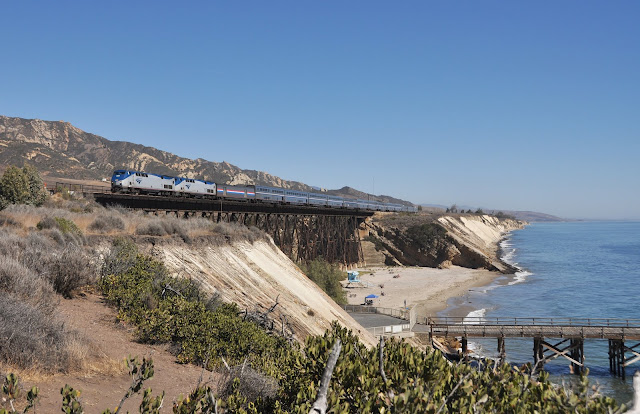 You may have noticed it has been a little quiet here over the last couple of weeks. I've been off on one of my trips again- this time to the USA traveling coast to coast with Amtrak, and then visiting some of the famous railspots in California. There will be plenty to read about over the coming months so do be sure to check back here for updates. As a taster I present here one of my favorite images if the trip, a view of Amtrak's train 14, 'Coast Starlight' at Gavotia Beach, CA on it's northbound journey from Los Angeles to Seattle on 6th October with Amtrak 11 an 157 in charge. Note the private California Zephyr dome cars on the rear of the train- an added bonus!
Posted by James at 08:59 No comments: